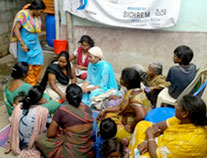 • RJ Priyanka was featured in Prajavani. T’ Radio Show'.
The article focused on #Yarivaru, the radio show hosted by her at Radio Active CR 90.4 MHz, and its recent win at the Likho Awards for Excellence in Media 2019, Mumbai, where it was judged the best show

Pinky Chandran spoke to The Daily Report on 9th February 2020

• RJ Mansoor and RJ Usha were at the Red FM studios to talk about Sustainable Menstruation. on June 16, 2018

• RJ Priyanka was at News X Kannada to share views on the Indian Supreme Court's reading down of Section 377 of the IPC, which effectively decriminalized homosexuality in India. She is the country's first transgender radio jockey and has for years been a voice of change on September 7, 2018

• Community Radio as a phenomena| The Hindu
https://www.thehindu.com/society/community-radio-as-a-phenomenon-winning-hertz/article22835066.ece

• In the pursuit of sustainability
https://www.deccanchronicle.com/lifestyle/pets-and-environment/101217/in-the-pursuit-of-sustainability.html

Here’s How Transgender Shanthi Sonu Turned Her Life Around When She Became A Radio Jockey
»Womensweb, Jaunary 20, 2016

Small talk with Akkai Padmashali: The one with many ‘Firsts’
»Bangalore Mirror, Novermber 1, 2015

In a first, transgender chosen for Rajyotsava Award
»The Hindu, October 31, 2015

Akkai to speak on transgender issues in Tokyo
»The Hindu, October 19, 2014

This RJ wants to transform lives of the marginalised
»The Hindu, September 6, 2012