When it comes to women’s participation in any aspect of public life, India has always walked a tightrope of contradictions. Nationalism dedicates a significant chunk of its propaganda to eliciting emotional responses from ‘mother’ terms but does little to involve women in decision-making positions. The patriarchal unevenness of the Indian political landscape is no anomaly, though. An Inter-Parliamentary Union study pegged the global average percentage of women’s representation in governments at about 22%. In India, that average is 11.8%, which places the country on rung 149 out of 193 on the women’s representation ladder as of July 2017.

Needless to say, these are abysmal statistics. These beg for a reconsideration of not just political election systems but also of social structures that put up barriers to women’s growth. Deep-rooted gender roles are the first impediments to women becoming visible in local government set-ups. In India, this sentiment is couched in talks of ‘tradition’, relegating women to domestic roles and tagging them incapable of, or unbecoming of them to consider, holding public office. Maneuvering around this has meant the introduction of reservations, which clearly cannot obliterate sexism or misogyny, but do forcibly ensure that at least a few women can take on visible roles at the local government level.

In a recent study conducted by UN Women in India in collaboration with Development Alternatives, women leaders from Gram Panchayat In select taluks of Karnataka were interviewed to understand their path to the election and their realities while fulfilling their roles. The 73rd and 74th Amendments of the Indian Constitution ensure the reservation of a third of seats for women in Panchayat Raj institutions and urban bodies, and Karnataka has long been viewed as a pioneer in this respect among Indian states. Today, the state’s gram panchayat, taluk panchayat, and Zilla panchayat clock 51.14%, 55.15%, and 53.21%, respectively in terms of women’s representation.*These numbers, while far more progressive when compared to state legislature statistics, do not, however, reveal the attitudinal challenges these elected women have to grapple with while holding their positions. The voices of the husbands are almost always at the forefront in the Panchayats where their wives are members. These spouses are also critical in helping their wives, many of them with only primary school education, secure the required certification, in filling the forms, and other pre-election procedures, affording them a lot of power in the functioning of the Panchayat even while being unelected.

Twenty-seven-year-old Kanyakumari, from the village of Itna in Heggadadevankote Taluk, Mysore district, first participated in the Gram Panchayat system in 2015. Driven by a need to do good, she filed her papers under the Scheduled Caste category. “My husband encouraged me to file the papers and also filled them for me because I had difficulty in writing.” The Panchayat has 11 members - 5 men and 6 women, which is a positive sign. “I wouldn’t have spoken up in front of senior members had I been the only woman,” Kanyakumari confesses.

KasturiBelur from BelurGrama from Dharwad taluk, Dharwad district, entered the fray under the SC-ST category with the strong support of her family and has been able to effect widely-recognized improvements in road infrastructure, drainage and toilet facilities, and more. She has also specifically targeted caste-based discrimination in the village. “All members of the Panchayat have treated me with respect and I haven’t faced any discrimination,” she says.

Reservation-enabled election doesn’t take away from these women leaders’ achievements, but it doesn’t stop the trend of their spouses being influentially involved in their functions. “Of course, I need my husband’s help! I inform him about the discussions at the meetings and he helps me make decisions,” says 33-year-old SiddammaSomanna from Saragooru Village in Mysore. “When everyone is present, I do get scared, though now I have become more confident.”

SeetaKambale, president of the Mandya Panchayat under Dharwad taluk and district, struggled with a similar fear of speaking up when initially elected. “The members of the Panchayat discriminated against me as I am a woman. They teased me,” she recalls.``I am illiterate and I got scared.”A male PA later helped her navigate financial and developmental matters and today, Seeta nurses ambitions of contesting from the taluk and district levels in the future.

At 57, Vasanthamma from B Matakere village in Mysore District is more experienced than many leaders involved in the study and works through a Panchayat whose 24-member house has a 50-50 split between female and male leaders. “My husband and son filled the forms for me and got the certificates that were needed for the election,” she says. “Everyone has given me their support and the work has been doing well.” The Panchayat has focused on building toilets and hostels, with more programs in sewage management planned.

The recent Karnataka elections may have thrown up gravely disappointing results in terms of women’s participation, but at the Gram Panchayat level, female leadership seems to be thriving. These leaders grow into the jobs, gradually gaining confidence and more vocal personalities. Family support, especially from the male members, however remains indispensable to these leaders. Societal attitudes towards women in leadership will continue to need a shift till male backing voices are considered a necessity for election. 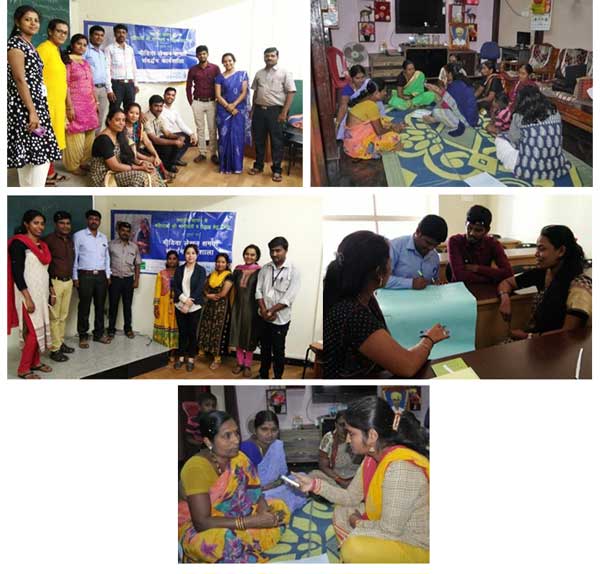