Ruthumathi season 1is a special radio series on Menstruation and Sexual Health produced by the adolescent girls of Kaveri Colony and Byrasandra Secondary School in Bangalore.

Menstruation is still a taboo word and most women shy away from discussing this openly with classmates or colleagues, especially in low-income settlements. Mothers and Teachers are hesitant to explain or talk about it even in the context of health or education. Given this background, Radio Active decided to explore the idea of girls talking about menstruation and sexual health issues. As a first step, a focus group discussion was held with key partners that included APSA, an NGO working in Byrasandra, along with the teachers of Byrasandra Government School. It was decided in that meeting as Radio was a safe medium, the apprehension to talk about these issues would be less challenging, and accordingly, Kaveri Colony was suggested as the target area.

This was followed by a series of focus group discussions throughout March 2014. The idea of the FGD was to gauge the receptiveness of such a program - both from production and listenership angles.

Two discussions were held with mothers. Approximately 45 women participated. Mothers mentioned the lack of awareness as one of the reasons for unwanted pregnancy, however were reluctant to talk about these topics to their daughters as it was embarrassing. They were also unsure & Uncomfortable about answering questions and felt that it was the teacher or an older sister’s job to do so, as their mothers never told them.

The FGDs with the girls from the colony and the Byrasandra School started with the girls giggling on the issue. Following several giggling fits, the moderator first shared her experience of her first period which helped them talk about it. They were not completely aware of menstruation, were curious about the body changes. Some of the girls, who had their periods, were confused about the dates, were not aware of the menstrual cycle, and had problems with white discharge, stomach cramps, mood swings, and irregular periods. The girls also spoke about problems of drying the cloth used, about going to school during the periods. Most of the girls also spoke about the custom that was followed at home including the celebration of “Waske”. Most of the girls were unsure as to why many restrictions were imposed during the period time.

They were excited that they would be able to produce their series to educate other girls and suggested the name for the series as Ruthumathi. (Ruthumati, in Sanskrit, means a girl who is at the age of puberty or a menstruating woman.) 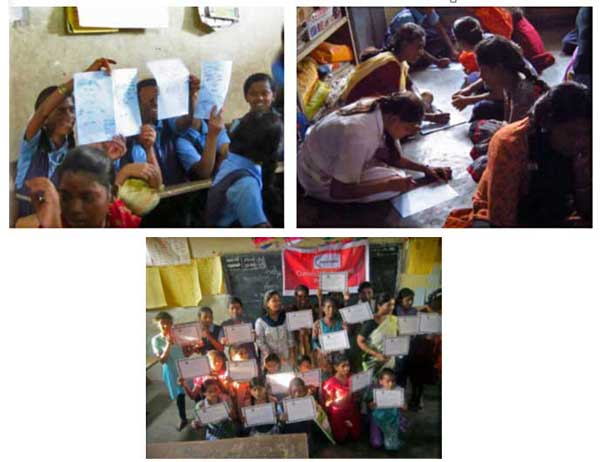 13 girls volunteered to be part of the Program Committee. The age group of the committee would be 12 to 17 years, with two volunteers from the station acting as mentors.

The next meeting held on 2nd April 2014 was to discuss the segments in the program, RJs, message matrix, and episode plan. The show was divided into three segments including Personal Stories, Radio Serial, and an Expert Talk or Panel Discussion.

The girls were then trained on production techniques and were taken to the studio for an orientation, which included a brief on the content policy of the station. Following the training, production began and the first episode was aired on 7th June 2014. A half an hour duration series aired every Saturday and Sunday between 12.30 pm and 1.00 pm and repeat broadcast on Saturday and Sunday 10.30 pm to 11.00 pm. A total of 20 episodes were aired. (After every third episode feedback received was aired)

The main objectives of the show were:

• To increase awareness among adolescents on menstruation and debunk myths associated
• To initiate discussions on the subject and build capacity in radio production on the topic.
• To document songs and customs around menstruation

Ruthumathi-Season 2 is produced by the adolescent girls of Indira Colony. The girls from Government

Primary schools in Domlur have shared their stories on menstruation. Before the production a small survey was conducted to gauge their understanding and practices