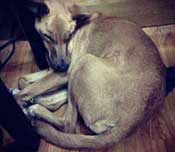 Under one of the chairs, you will find our beautiful six year old Bonnie catching a quick nap between the working hours! When she is not taking her power naps, she awaits the visitors of Radio Active for a brief Bonnie style welcome! Is she a terror then? No, you’ve got it all wrong. The innocent eyes and the wagging tail keeps everyone at Radio Active stress free even on days when the deadlines are catching up. And she is always on time for all the meetings! A desi by breed and heart, Bonnie is also quite a foodie like most of us and was adopted by Radio Active as a part of Stray Pals project. Tricks to make Bonnie your friend – Marie biscuit works like a magic! 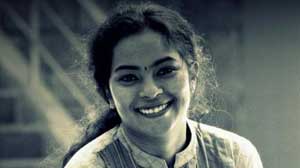 Her smile can light up the station- Warm, Pleasant and Organized, Beula has been associated with Community services from the past three years, after travelling in the UK. Her energetic and positive outlook, is an inspiration for the team. She has been instrumental in setting up systems for the effective functioning of Radio Active and actively contributed to the success of Radio Active. Beula is also a member of the SWMRT and has been part of the Bengaluru Recycling Habba. 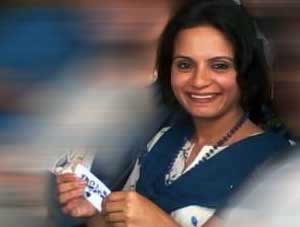 She joined IDP Education Australia, in 2000, as a key member of the start-up team and was instrumental in establishing operations, building networks, and identifying opportunities for partnerships. She was able to successfully work across all verticals of counseling, business development, consulting, and customer & client services, day-to day operations, marketing & branding, training, event management and market research.

She was responsible for facilitating the Articulation Program between Christ College, Bangalore and Griffith University, Australia in 2003 and also coordinated the activities of the IDP Peace Scholarship in 2004.

Pinky joined the Jain Group of Institutions to head the Training & Development Division in 2005. A certified practitioner of Neuro-Linguistic Programming from the National Federation of Neuro-linguistic Psychology (NFNLP), USA, she has imparted learning to over 2500 individuals on leadership, team building, customer service, personal development, effective interviewing, etc

An ardent believer in the power of community media, she has been instrumental in the launch of Radio Active, a community radio station, in June 2007 in Bangalore- dedicated to providing a space for different groups to come together to create their own media landscape. Under her leadership, the station has reached out to different communities of interest, community based organizations and institutions, expanded broadcast hours to 24 hours and has attained an exemplary status of being one of the most inclusive and community – centred station in the country.

She has also been deputed by Commonwealth Educational Media Centre for Asia (CEMCA) to mentor Deccan Radio – a community radio station in Hyderabad to develop a sustainability plan (2012-13) and was deputed on behalf of the Department of Science & Technology, Ministry of Science & Technology, GOI on behalf of Commonwealth Educational Media Centre for Asia ( CEMCA) to conduct Baseline and Capacity Building Workshops for the Planet Earth project to Kongu Engineering College, Erode, ( 2009) and MOP Vaishnav College, Chennai ( 2009); the Science for Women’s Health project to VIIT Baramati ( 2009 ) and FTII, Pune (2010).

She is also a steering committee member of the South Asia Network for Community Media (SANCOM), a virtual network that was launched in 2015 to promote community media in the South Asia region, for a democratic and pluralistic media environment.

Pinky is also an active campaigner for decentralized community based waste management and is a member of the Solid Waste Management Roundtable, (SWMRT) Bangalore. She has worked on several policy related documents and reports and has co-authored a paper on “A Working Observation on SWM Policy- Karnataka State and ULB Bangalore”, and “A working observation on the Dry Waste Collection Centres”, to gauge their performance and contribution. She has also co-conducted a study for the Revenue Department, Government of India on “Temple Waste Management in Bangalore Case Study of 10 temples in Bangalore “. She also has been instrumental in co-promoting the concept of Dry Waste Collection centres in Bangalore, and has spent over two years with her colleagues documenting the operations of the pilot centre in HSR Layout.

As one of the trustees of HasiruDala, (means “Green Force”), a member-based organization of waste-pickers, sorters and itinerant waste-buyers in Bangalore, working towards improving working conditions and access of waste, she is focused on training and capacity building for waste-pickers and has developed the “Waste-picker Training Manual “, and is presently working on the “Scrap Dealer Training manual”. A keen researcher she has also co-authored a paper on the “Informal Waste Workers Contribution in Bangalore”, to determine their economic contribution to the city. She is present researching at Nayadahalli to map recycling activities and presented a photo-exhibition titled “Daastan-e-Nayandahalli”.

An animal welfare activist, she makes it a point to devote time to tend to street dogs in the city and has co-founded Stray Pals which works on policy advocacy issues on street animals with the municipality, in addition to training, sensitization and handling cruelty cases.

Having worked with different movements, she recently co-founded an initiative called Ondede, which means Convergence and envisions a convergence of the three inter connected movements of child rights, women rights and sexual minority rights across Dignity, Voice and Sexuality.

In 2012, she was selected among 600 candidates as a delegate for the inaugural Australia- India Youth Dialogue; the AIYD was created with the aim of forging a sustainable strategic dialogue between the youth of Australia and India in the areas of education, economics, business, security and climate change. In 2014, she received the AIYD Alumni grants for a small study titled “Community Radio: Lessons from Australia”. The report was released in January 2016.